We’ve put the pedal to the metal as our summer-long road trip continues. This month we’re heading west where we will visit our team of 40+ in Denver, CO. This is home to multiple programs that began the rebranding process on July 1, changing their name from OnPoint Underwriting to Arrowhead. Let’s check in with the folks from the mile-high city and learn about their team. 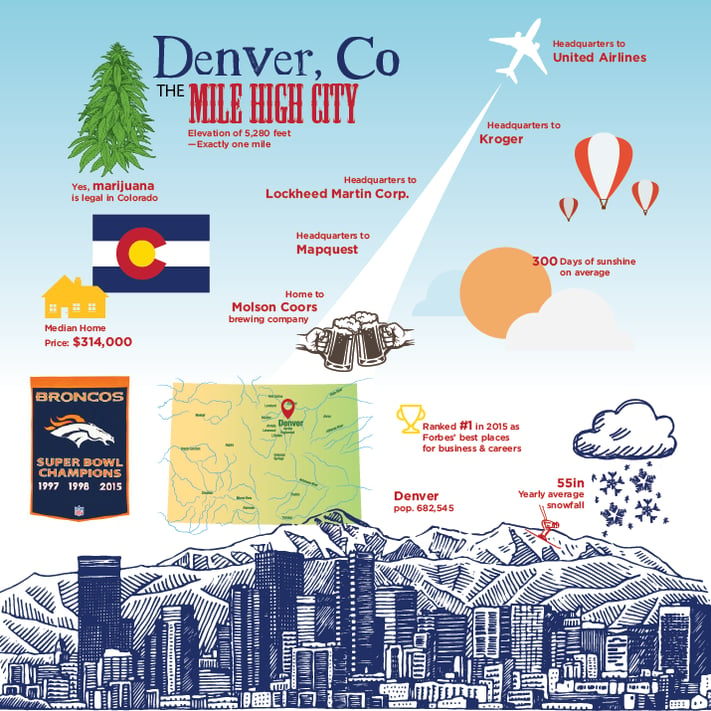 Getting Higher in Denver

Yes, recreational marijuana is legalized in Colorado. But that’s not why visitors have a hard time breathing when they visit. We’re talking about the city’s high altitude. (The cure - stay hydrated!) While Denver is located precisely one mile above sea level, it's low enough to be located at the base of the Rocky Mountains about 65 miles away. (If you are curious how the marijuana thing works in Colorado, check out the Denver Post’s guide here.)

A common misconception noted by our Denver teammates is that first-time visitors assume the city is in the mountains and features dusty roads and Old West scenery from the gold rush days. Sorry to burst bubbles, but Denver's a major metropolitan area (10 surrounding counties), has a population of 2.9 million and is flanked by flat land to the east and the Rockies to the west.

Denver locals often remark how drastically the weather can change over a day. It's not uncommon to have 40-degree temperature differences from one day to the next. Denver also boasts more sunny days per year than the self-proclaimed Sunshine State, Florida... even with an average of 55 inches of snow.

The office has closed quite a few times over the years due to blizzards. They follow the school districts - if they close the schools, they close the office. The good thing is that the snow melts pretty quickly (must be all of that sunshine). One thing that may have caused a cloud cover over our Denver office is the changes they’ve gone through over the last few years. Let’s check in to see how they’ve been able to keep their dispositions so sunny.

“The one thing constant here is change.” – said everybody

Have you ever watched the movie Ferris Bueller’s Day Off? There’s a scene where a student tries to explain to the teacher why Ferris isn’t in class. (Get up to speed with the clip here.) Getting the history of the OnPoint office is a lot like that conversation – hard to follow. To help break down the dates and names have a look at the timeline below:

2017 – Moving to new office (In a blended office with Beecher, Arrowhead, OnPoint and ACM)

Looking at the timeline above, we can clearly see the Denver team has experienced a lot of change over the years. Let’s dive into their story three years ago. It was July 1, 2013, and Scott Marshall, CEO of American Claims Management (ACM), took on the additional role of president of OnPoint Underwriting after Brown & Brown's acquisition of Beecher Carlson.

“I was looking for some diversity from ACM, so this was perfect,” Scott recalled. The OnPoint team had a bumpy start following the transition away from Beecher Carlson, he added. During the Brown & Brown acquisition, OnPoint lost its company president and backroom support such as IT, accounting and marketing. “That’s a pretty big challenge to not only introduce them to a new culture, but also to do it with very limited operational, accounting, marketing and IT staff. It was tough.”

The first thing he did was to get communication rolling with the senior staff, pointing out the positive side of the integration. “A lot of great people were united because at the time OnPoint was pretty siloed.” Now they’re collaborating on a regular basis, Scott said. 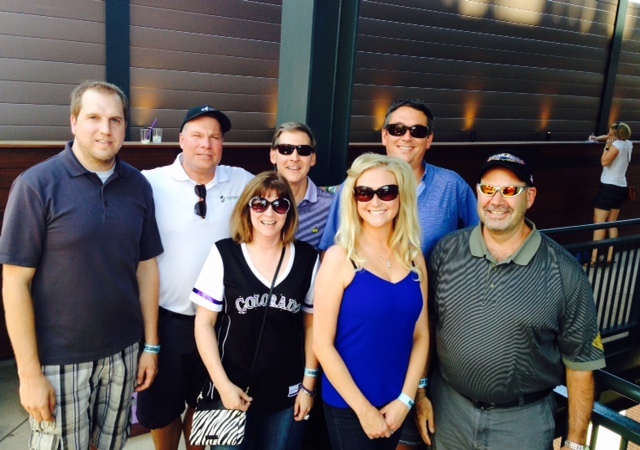 Denver knows how to roll with the punches

“Change is definitely prevalent in this office,” remarked Paul Boehm, senior vice president of Tribal. Joining the team in March 2015, Paul quickly learned about all the transformations the team had undergone. “The change management here has been crazy. But what they’ve been able to accomplish by sticking together as a core group is impressive.”

Richard Poling, managing director of Affiliate Programs, agrees. “With the OnPoint team it doesn’t matter what program you're in, the people in the office all use the same systems and have a great deal of interaction. We still do things independently but there are a lot of friendships and communication here.”

"We're continuing this tradition of change with new branding, a new product and a new carrier, all effective July 1," Paul said about the Tribal Program. "Rebranding OnPoint to the Arrowhead name helps us take advantage of the synergies with resource sharing and leveraging the name with carriers," Paul said. "The name is coincidently great for the Tribal program, and the Arrowhead name definitely has carrier klout," he added.

Not all OnPoint programs are changing to the Arrowhead name this year. Richard explained he plans on eventually moving all of his five programs over to the Arrowhead name, with the Security and Alarm Program being the first. “We had a carrier change with that one, so it was a good time to change all messaging and materials with a whole new marketing effort.”

Communicating change with clients is key

Maureen will have been with the Tribal program for 20 years this November; she too has experienced multiple name updates over the years, from CIS to OnPoint to Arrowhead and ACM for the claims team. She noted the biggest hurdle the team has to overcome with all of these changes is their main competitor telling clients that the Arrowhead Tribal Program is not stable.

“Actually, it’s the opposite,” Paul said. “We’re making improvements to the program, and the connection to Arrowhead helps us do that. This is strengthening our product.”

He explained that the Tribal Program signed on with a new carrier, Old Republic, and they are revamping their product to be more innovative. Scott added, “Finding a carrier to be innovative for this product is difficult. Old Republic has 60-70 years under their belt, but they’re definitely bringing innovation to the product. They just started this program, so we have a blank canvas.”

Scott agreed that OnPoint's move to formally join the Arrowhead brand helps them leverage Arrowhead's 30+ years of experience, a nice reputation in marketplace, deep penetration in distribution and solid carrier relationships - all which help the Tribal team to innovate and grow.

What’s the next change on the menu for the Denver team? “We’re moving in February,” said Melissa Claypool, operations manager. “Construction starts September. The space was completely gutted, so we can design it exactly how we want. It’s a blank canvas.”

Mark your calendars because in February 2017, the Denver office will be moving to 8000 E. Maplewood Ave. Building # 5, Greenwood Village, CO 80111. The new office is 2.2 miles from their current space and offers great amenities including an on-site fitness center with showers/lockers, a beautifully updated on-site training room for up to 50 people, an on-site café with a new outdoor patio, a complimentary shuttle bus that takes employees to a nearby strip mall with lots of food choices, a landscaped outdoor pavilion and close proximity to the Arapahoe Light Rail station.

CHECK OUT THE NEW DENVER DIGS >>

Melissa has been the liaison between all parties involved on this project and has enjoyed working on the design with the architects. She’s most excited about the new amenities, including the fitness center and the onsite café. “The onsite deli will be great because I’ve been eating at my desk my whole career,” she laughed.

“I'm looking forward to it,” Maureen agreed. “We’ve been in this space for seven years, so it'll be nice to get into something with fresh paint and carpet.”

Richard added that his staff is also excited about their new digs. “The Light Rail is right near the new office, and there's lot of other neat stuff to check out.”

The only downside to leaving their current space will be missing out on prime access to free summer concerts. Every Tuesday during the summer, bands play in the park right across the street; many Denver teammates head over after work to take in the tunes. “It really is cool,” Maureen said. "We'll have to take advantage of it since it’s our last summer here in this building.”

Keeping the morale up amidst all the change

Paul took the tribal team in late April to the Top Golf driving range before their big July 1 push. Then, in the first week of July, they hosted a Survival BBQ. “It was a good thing to bring the group together to celebrate the 7/1 changes,” Paul said.

Charity is the other name of the game in this office

Melissa is on the Charity Committee and has taken the lead organizing Denver's charitable events. Her involvement began last year when a teammate told her about a young girl named Daisy in nearby Aurora who was diagnosed with cancer.

They kicked off 2016 with two fundraising events - but this time it was their own they were taking care of. Receiving devastating news that his father was diagnosed with cancer, Claims Supervisor Ethan Swancer was needed immediately back home in Pennsylvania. Within hours they raised $480 between Penny Wars and coworkers buying a jeans day at work. And then, when they heard that Accounting Rep Stephanie Ackermann’s son was battling Rhabdomyosarcoma, a rare form of cancer, they created a Super Bowl pool raising $1,100 for Stephanie to be able to take her son somewhere fun to get his mind off of the treatments. 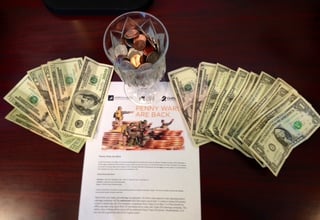 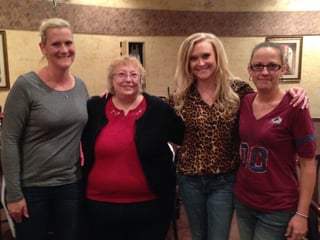 In second quarter 2016, Melissa set up fundraising for REEL Recovery, a fly fishing retreat for men with prostate cancer. Coworkers bought jeans days and raised $815 to send one cancer male patient to the retreat.

"There’s so much help that can be done locally and if you have an office behind you it’s a lot more powerful."

Charity fundraising isn’t the only thing this team is giving. They’re also offering advice for anyone who visits the Denver area. Here are their recommendations of what to see and do:

Maureen: We are a sports city. After all, we’re the home of the Super Bowl Champs! Broncos tickets are very expensive but if you can score them definitely go. They’re a lot of fun and the fans are crazy! 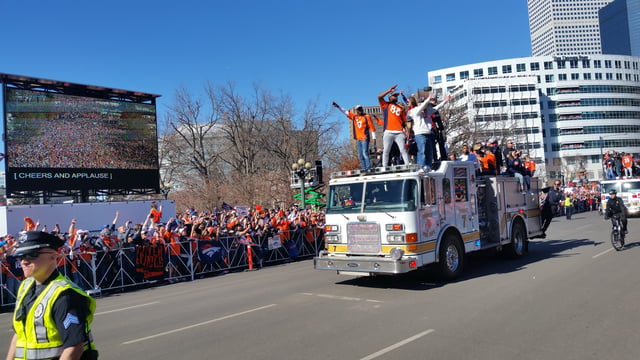 Richard: Downtown is very popular and growing like crazy. Union Station and Rhino are hot spots; be sure to check out local craft breweries popping up everywhere. Denver's a huge cyclist town and has lots of groups you can ride with. Also try Trail Ridge Road through the Rocky Mountain National Park. If you have time, get off the beaten path and go camping, hiking, skiing or fly-fishing.

Melissa: Check out Casa Bonita in Lakewood. They’ve been featured on The Food Network, not particularly for their Mexican food but rather the cliff diving show. That’s right, cliff diving! They also have an arcade and cave in their 52,000 square foot restaurant. Then head to Glenwood Springs for their huge outdoor mineral pool. And definitely check out the annual hot air balloon festival in Steamboat Springs.

Paul: Go to a concert at Red Rocks. To experience the mountains, there's plenty of camping or great resorts; you can go hiking, white water rafting and snowshoeing. For city life, head downtown to the trendy neighborhood, Lo-Do. His go-to restaurant is the famous steak house, Shanahans (owned by the former Broncos coach) where you can check out the Super Bowl trophy and rings. If you like margaritas, head downtown to The Rio. The margaritas are so good (and strong) that they cut you off after two, he says.

Thank you for visiting the Denver office. Tune back in next month in August when we end our summer road trip with a visit to our California offices.