We’re kicking off our company's summer road trip in the Southeast and featuring our two offices – Tampa and Alpharetta. Let’s meet the people who make these places hum and find out more about their regions.

Our Alpharetta, GA office, which is about a 45-minute drive north from the Atlanta airport, is home to three of our companies while also renting space to Brown and Brown and hosting folks from OnPoint Underwriting who live in the area. Alpharetta has truly become an important hub as the heart of our business in the eastern United States. 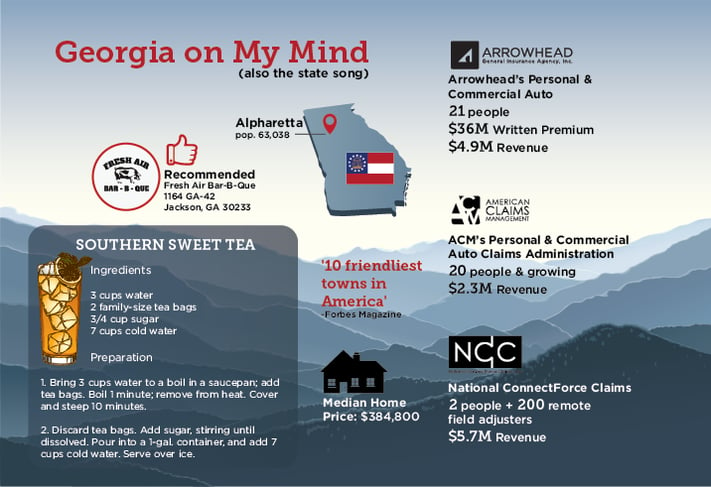 WE’RE FIXIN’ TO TELL YOU SOME HISTORY

The Alpharetta team joined our family by way of acquisition in 2012. But the history of the core group goes back much further, with many of them working with each other for decades. In fact, Paul Serota, vice president of underwriting operations, has been with the team the longest - 31 years! "He was in diapers when he started here," jokes coworker and director of business development for the Arrowhead Auto Program, Thad English. "In fact, we have a lot of people who have stuck with us throughout all our changes over the years. We’ve hung in there through thick and thin. We’re basically family.”

Some of Thad's fondest office memories are from their Christmas parties in the 90s when then owner, Ed Craze, would tape $100 bills to the bottom of everyone's chairs. "He threw a heck of a Christmas party," Thad said.

1979 – Purchased by Ed Craze, father of Chip Craze, current president of Arrowhead Auto Program.  Their first office building was nicknamed "The Dungeon"
1988 – Ed Craze then formed an insurance company, which is how they operated until they sold

2012 – Acquired by Brown & Brown and placed under Arrowhead management 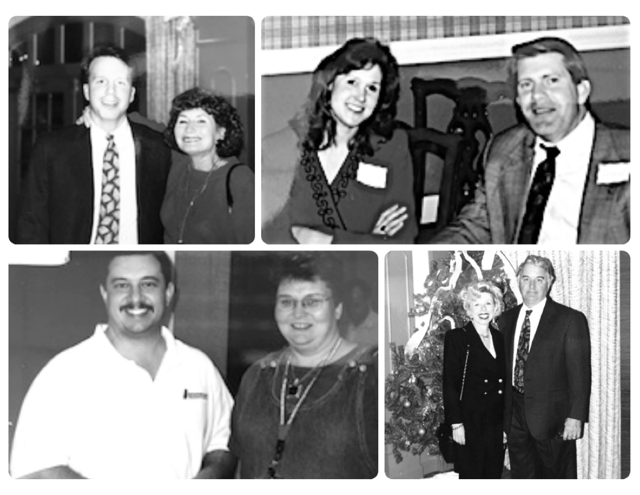 In the spring of 2012, Arrowhead worked with one of its longtime carriers, Everest National Insurance Company, to reroute their Southeast Personal Auto Program and its claims team to Arrowhead and ACM. In the same year, the newly formed National ConnectForce Claims company was able to utilize the Alpharetta office and become neighbors with both of the Arrowhead and ACM teams.

WELL, THAT JUST DILLS MY PICKLE

Now, how about you pour yourself some sweet tea as we hear about life in this Southern hub. What is sweet tea some of you ask? Well, it’s been described as half tea and half sugar by visiting teammates from the California offices. But to the natives of Georgia, it’s a daily staple. Wondering about the "dills my pickle" saying above? Skip to the end of this blog to find out what this Southern saying means and to learn a few more.

I RECKON WE BETTER TALK ABOUT THE ALPHARETTA AREA

Chip Craze, president of Arrowhead’s Auto Program, said one Atlanta landmark not to be missed while in the area is The Varsity – the world’s largest drive-in since 1928. Curious about their world famous chili? You’re in luck! They’re selling it by the can. When asked who would win – In & Out vs. The Varsity, Chip conceded that In & Out would. He admitted he’s not much of a fan of The Varsity's food but said his father-in-law ate there everyday during college because he could order a hot dog and a frosted orange for 15¢. Prices haven’t gone up too much because a hamburger now-a-days will only set you back $1.89.

Another must-try in this neck of the woods is the barbecue. One BBQ joint highly recommended by Thad is a place called Fresh Air BBQ in Jackson, GA, which is nearly two hours south of Alpharetta. It’s off the beaten path but worth it, he says. “They’ve been in business since 1929 and they’re just the best. They smoke the meat right. The beans and slaw are wonderful. They've just got it down to a science,” Thad said.

However, visitors to their office won’t be taken that far off the grid for lunch or dinner. Their usual go-to’s near the office are Cabernet for steaks or Vinnie’s for Italian. They like to stay near the office because the resounding comment heard from the whole team in Alpharetta and visitors alike is how bad the traffic is.

Although Alpharetta has a population of 62,000, the city is home to many large companies such as Coca-Cola, UPS, Home Depot, Macy’s and Verizon just to name a few. That drives the city’s daytime population to over 100,000, which is 3,500 workers per square mile. Yikes! That is a lot of cars on the road.

ONE GUSSIED UP TOWN

There’s a reason why so many companies are setting up shop in Alpharetta. Chip described Alpharetta as a growing suburb with a small town feel mixed with office and retail development and a surrounding area with farmland. And boy is it growing. In 2012, the Census reported Alpharetta as the sixth fastest growing city in the country. That might be thanks to Forbes who named Alpharetta as one of the 10 friendliest cities in America and one of the 25 best places to move to.

Alpharetta has been marketed as a great place for families with a wonderful quality of life and affordable homes. Doug Smith, ACM’s associate claims manager, couldn’t agree more. “I’ve been here my whole life. It’s a great place with lots of opportunity. We have four seasons of great weather and everything is family-oriented.”

According to Zillow, the median home value in Alpharetta in April 2016 was $384,800, and they predict values will rise 4.7 percent in the next year. It's definitely a newer town with more than 90 percent of the houses built in 1980 or later. “It’s a real up and coming area,” Doug said. “But yeah, the traffic stinks.” That’s why he and his ACM team integrated flex-time to accommodate coworkers with extremely bad commutes.

Traffic aside, if you’re excited to check out the prospects of relocating to their area, the team has noted a few other things that tend to make the biggest impression on the newbies. “Pollen,” Thad said. “It’s everywhere in the spring.” Doug agreed. “My kids have to get their annual allergy shots,” he said. Apparently the pollen coats everything in a light green film. Cars get covered, and it can even change your shirt color if you’re outside long enough, Thad explained.

The other factor to consider when visiting Alpharetta is the heat. “The number one thing everyone says when they visit for the first time is how bad the traffic is and that the humidity is terrible,” Chip wrote in an email.

The Alpharetta team has a few ways to beat the steamy heat aside from drinking sweet tea. “We have a conference room we call ‘the morgue’ because it’s so cold in there,” Thad explained. “The ladies don’t like that so much so we also call it ‘the cooler'.”

WHAT'S A YANKEE SAY ABOUT ALL THIS?

So what’s an outsider’s perspective on this Southern office? Matt Stringham is the director of Personal Auto based in the Carlsbad, CA office. He oversees the ACM team in Alpharetta and has frequently traveled to their office. “Yeah, the traffic is pretty bad there. I have to plan my whole day around it. But it's really green and it's nice to see a difference from the Carlsbad office."

And Matt's go-to food spot when he's visiting? "I found a great brewery called Hop Alley nearby the office. It's a great place to try the local beer." He also noted that the Alpharetta team says "ya’ll" a lot. “They even write it in their emails!” Matt exclaimed. “It’s great. I love it. It’s just different from the California way.” 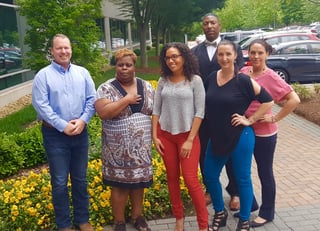 Noting the culture differences goes both ways. Doug commented that hearing the California team say “you guys” all the time took some getting used to. He also thinks the idea of riding bikes to the beach is so different. “Riding around with a surfboard on your bike sounds so alien to me,” Doug said. "Alien but fun!"

Another one of our companies based in the Alpharetta office is National ConnectForce Claims (NCC), a subsidiary of ACM. This team is unique because they don't have a lot of full-time employees. Instead, because of the nature of NCC’s business as field claim adjusters, they need to be where the catastrophe claims are. That's why they don’t need a large presence in the office.

They have two full time employees who hold down the fort in Alpharetta - Matt Anderson, NCC's founder and COO and Betsy Rogers, the sales and marketing manager. "Rhonda, Mike, Carrie and Brent make up the core team with Matt and me," Betsy wrote over email.  "We have about 10 support staff that are based in the Alpharetta office but work remotely." A majority of their team consists of a large group of contract field adjusters across the U.S. 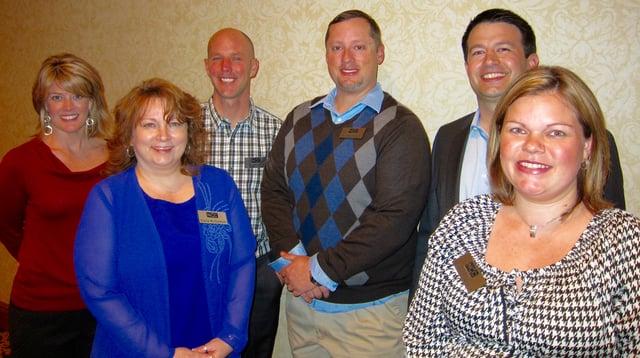 “Each month, NCC engages 200 independent contractors across all 50 states,” Betsy said. “Our virtual infrastructure gives us the ability to attract the best employees in our space and it also allows us to rapidly scale up and down as claim volume warrants.”

But they don't take their relationships with their contractors for granted. Having face time is extremely important. That's why every year they host a conference for their adjusters. In years past they've hosted it in Biloxi, MS, New Orleans and this year they hosted the festivities just outside of San Diego.

In an email, Betsy described one of the awards they're proud to give every year. "One of our awards is called the Rhino award. It is loosely based off the book Rhinoceros Success." She explained that's because like a rhino, adjusters need to be hard-charging, goal-oriented, persistent and thick-skinned with a great attitude. Kudos to the 2015 winners! And a big thank you for your service! 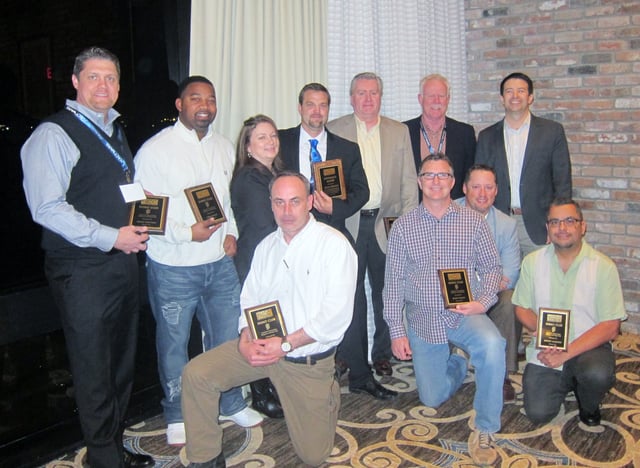 "Full as a tick." - Thad English says this is what you yell out when your stomach is happy and full.

"Ya'll will have to come visit. Bring your youngin's with you." - Doug Smith

"I reckon this will do." - Doug Smith

We incorporated a few other fun Southern sayings throughout our blog. Check ‘em all out here: http://hubpages.com/literature/Funny-Southern-Sayings-and-Southern-Expressions

Thank you for visiting our Alpharetta, GA office. Next stop on the 2016 company summer road trip - Offices is the Midwest! Be sure to check out our June newsletter.